After extensive research some remarks about the Sharp Dust Sensor in a 3.3V environment:

The logical level of a 3.3V environment is NOT sufficient to suppress the IRED (IR – LED) of the sensor! It is mandatory to use a level shifter or another device to lift the logical level close to 5V.

Remember: A HIGH level means that the IRED is off, a LOW level activates the IRED.

Another problem is the stability of the readings. After Sharps manual the IRED needs a voltage supply of 5 V +/- 0.5 V. Extensive research (extensive if done besides a job) supported this recommendation strongly.

The IRED supply voltage (PIN 1) was only 3.7V if 3.3 V logical level was applied to the related pin of the sensor (PIN 3) despite the stabilized supply (see below).

With a level shifter the IRED supply voltage was 4.7 V under similar conditions.

It showed that at least 50msec between to measurements were necessary to give stable measurements. Below 50msec the 220uF capacitor (loaded via 150Ohms, see Sharps sensor manual) was discharged below 4.5 V and the ADC readings were not stable. The voltage is to low to drive the IRED with the full design intensity thus the resulting scattered light intensity measured by the photodiode of the sensor arrangement is reduced resulting in lower ADC values. 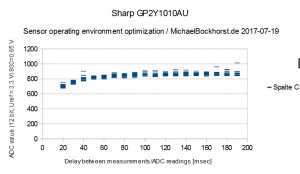 The ADC value of 800 corresponds to 0.65 Volts while 0.6 Volts is the typical sensor output offset value. Add some dust and the measurement is on spec for the sensor.

The electrical power supply is made from the following chain:
Step up converter (from 5V pin on Due to 8Volts) – 7805 linear regulator to get stable and precise 5V.

After some more scientific text some personal remarks: To figure out these details took a lot of hours of research. The primary concern of switching to the Arduino DUE was to get rid of to much level shifting. Besides the project of a mobile environmental data logger was growing to large for an Arduino nano (clone). RTFM is a wise short for … do your homework. And great times: To have lots of cheap Nanos and I2C enabled LC displays to do the research.

But after the journey I feel very good while listening to the Sarasate recordings with the great violinist, Mrs. Tianwa Yang. (Label: NAXOS)